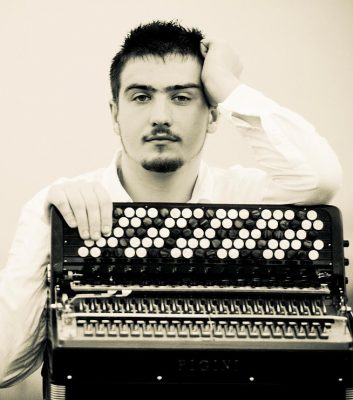 Bartosz Glowacki is one of the leading lights of a new generation of accordionists. In 2015 he graduated from The Royal Academy of Music with a first class diploma and Regency Award for noticeable achievements. He is currently a postgraduate student at The Royal Academy of Music, City of Music Foundation 2016 Artist and Artist in Residency at Aldeburgh Music. Bartosz is the winner of many National and International Music Competitions including the Polish Young Musician of the Year in 2009, following which he represented Poland in the Eurovision Young Musicians Competition in Vienna. As a soloist he has performed in many prestigious venues including the Wigmore Hall, the Royal Festival Hall, the Purcell Room, Salle Cortot, The Colston Hall, Studio SI of The Polish National Radio. He has premiered compositions by Luke Bedford, Richard Causton, Richard Ayres, Christopher Austin, Maciej Zimka, Marko Nikodijevic, Diana Burrell and Johannes Schöllhorn. As well as being a soloist, Bartosz is extremely active chamber musician. He is a founding member of The Deco Ensemble. Bartosz has worked witht he Royal Opera House, the Royal Ballet, the National Theatre, the London Symphony Orchestra, Chroma Ensemble, the Philharmonia Orchestra, the London Sinfonietta. Forthcoming plans include the release of his debut CD featuring contemporary works for accordion entitled Out of the Depths.

…for me the coup de foudre was Bartosz Glowacki… the young Pole creates a poignant and distinctive sound world.
Fiona Maddocks – The Observer

This concert is supported by the Countess of Munster Musical Trust