We are very pleased to welcome Alison Balsom, the world famous trumpet player, accompanied by David Goode on the organ. 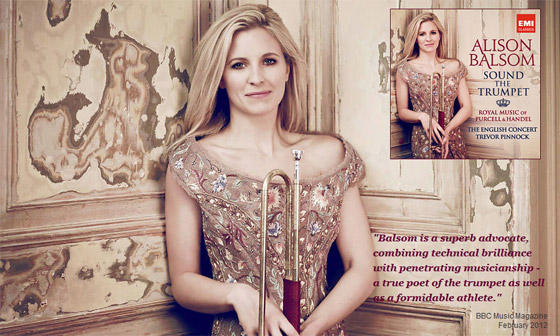 Twice crowned ‘Female Artist of the Year’ at the Classic BRITs, Alison Balsom has cemented an international reputation as one of classical music’s great ambassadors and is ranked among the most distinctive and ground-breaking musicians on the international circuit today. Balsom has also been honoured with numerous awards by Gramophone, Classic FM and ECHO Klassik.

In 2009, Alison Balsom headlined one of classical music’s most celebrated concerts – The Last Night of the BBC Proms – which reached its biggest ever global television audience of an estimated 200 million. In December 2010 Balsom went on to make her US television debut with the Orchestra of St Luke’s on The Late Show with David Letterman – a platform few classical artists have gained access to.

The 2011/12 season saw Balsom make return visits to China where she performed with Lorin Maazel and the National Symphony Orchestra and to the Los Angeles Philharmonic with whom she made her Hollywood Bowl debut. Other season highlights included concerts with the Toronto Symphony Orchestra, Orchestra della Svizzera Italiana, Chamber Orchestra of Philadelphia and the Royal Philharmonic Orchestra. In 2012/13, Balsom will embark on major international tours of Europe, China and the US with the Wiener Symphoniker, kammerorchesterbasel, Concerto Köln, Scottish Ensemble and the Philharmonia Orchestra. 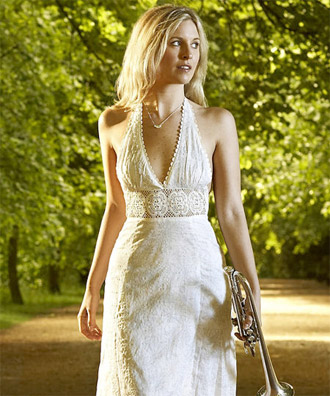 Balsom’s highly distinctive sound earned her much recognition in her early career when she mainly reached her audience through radio broadcasts under the auspices of the BBC Radio 3 New Generation Artists scheme. While represented by the Young Concert Artists Trust, Alison caught the ear of EMI Classics with whom she records exclusively. Her internationally celebrated Bach Trumpet and Organ disc of 2005 was quickly followed by ‘Caprice’ which won her further critical acclaim. Alison’s third album, featuring the great pillars of the trumpet repertoire, the concertos of Haydn and Hummel, firmly established her as one of the world’s leading trumpeters. ‘Italian Concertos’ which is made up of Balsom’s own arrangements of Italian Baroque Concertos, became EMI Classics biggest selling album of 2010.

In addition to transcribing and arranging existing works for her instrument, Alison is increasingly active in commissioning new works for trumpet. Her world premiere performance of James MacMillan’s Seraph at Wigmore Hall in February 2011 went on to become the title track of her 2011 release for EMI Classics. Her latest album, Sound the Trumpet, sees Balsom perform a variety of works by Purcell and Handel with Trevor Pinnock and The English Concert on period instruments.

Alison studied trumpet at the Guildhall School of Music, the Paris Conservatoire, and with Håkan Hardenberger. She was a concerto finalist in the BBC Young Musician competition in 1998 and received the Feeling Musique Prize for quality of sound in the 2001 Maurice André International Trumpet Competition. Alison performs a wide range of recital and concerto repertoire, from Albinoni to Zimmermann and performs on both modern and baroque trumpets.